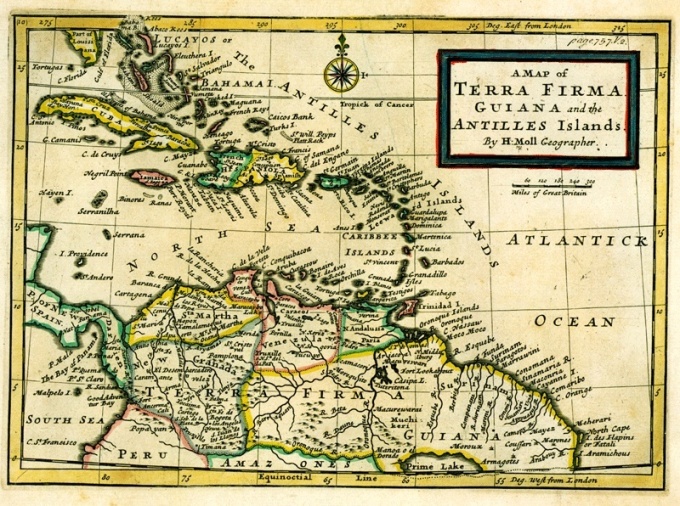 Aruba is just one small Island in the Caribbean, and part of a large story that unfolded after Christopher Columbus stubbed upon these parts of the world. Currently approximatly 87% of the Aruban economy relies on tourism. One big part of the current tourism marketing strategies is story telling. This stems from the trend of people (tourists, visitors and travellers) looking for authentic experiences. But not only them, also the local population is looking for identity which often lies embedded deep into our history and roots. As a result we can find many stories, about culture, history and what makes Aruba authentic compared to the rest of the world. Although most of these stories are true, they often lack perspective and cover large amount of time in a summarised way. In my opinion this creates a distorted view of our history and roots. Therefore this blog. And after 6 chapters, we are now getting into the nitty gritty of the real roots of  current Aruba.

As described in the previous chapters the main take aways are that Aruba played a small role in the vibrant Caribbean history. However, this depends on perspective. For the indigenous population of the Arawak and Caiquetios from mainland Venezuela and Colombia, Aruba was extremely important as it provided a safe haven and allowed them to live free from (religious) persecution. For the Dutch, who came later, Curacao was the most important Island based on its strategic position in the Caribbean and the Americas. Nevertheless, Aruba was a necessary island they had to posses in order to keep control over Curacao and Bonaire. And with this, control over the routes the Spanish took when shipping wealth back to Spain.

From 1499 up to the late 1600’s, the cultural and social development of Aruba was relatively simple. As both the Spanish nor the Dutch allowed European colonisation. And therefore the main population, besides the handful of Dutch WIC men, was comprised of the Arawak who converted to Roman Catholicism. But other than that, they did not adopt too much to European culture.

The first continuity that Aruba has experienced was when it was property of the WIC around 1639. The first chapter of the WIC went bankrupt and a second chapter was immediately founded in September 1674. Remember, that Aruba was still not officially part of the country “The Netherlands”.

So what did affect Aruba in such a way, that we are now a big melting pot of nationalities, people, religions and culture? Why is Aruba an island where standard of living is high compared to the region? Has it always been this way? My research taught me that Aruba has known some hard & difficult years. These included famine, poverty and economic stagnation. However, the people who lived and worked on Aruba from the late 1600’s onwards, were, in my opinion, the first (authentic) roots of what we now know to be Aruba.

In the next chapters I will do my best to dig up as much as possible on the period between 1639 and 1791, when it was property of the WIC. Because it wasn’t until December 31st in 1791, that Aruba became part of “The Netherlands” as a colony. 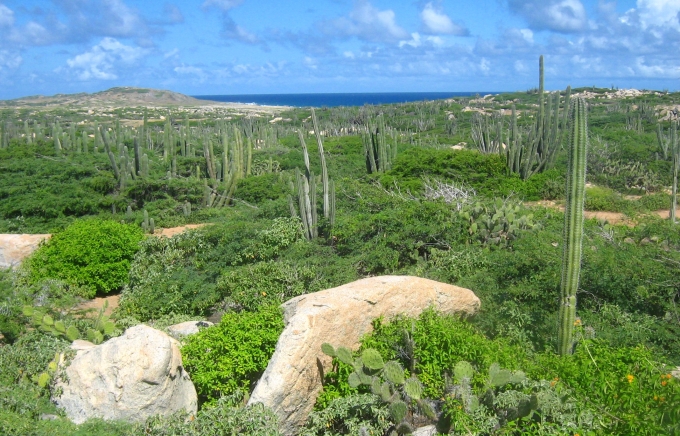 In the era that Aruba was property of the WIC, from a history timeline perspective, it was quite unremarkable. That does not mean that nothing noteworthy happened. There is not much documentation to be found on these “forgotten” years. Nevertheless, here are some chapters in Aruba’s history worth telling. Even though one tends to forget, it is interesting to realise that during this Period The Dutch were at war with the Spanish, till 1648, the Portuguese and with the English. The latter was called the Anglo-Dutch wars of 1652-1654 and 1665-1667. In the end it resulted in the Dutch losing New Amsterdam (New York) to the English (but getting Surinam in return).

The first economic activity on Aruba – Export to New Amsterdam

Of the 3 islands, Curacao was the most important one. And Aruba was always under the shadow of its larger sister Island. Nevertheless, the Dutch WIC started breeding horses on Aruba, that they would export. Remarkably the first export of Aruban horses was to New Amsterdam, current New York. I say this, because for the past decades from the late 1980’s up to now, New York is still the number 1 source market for Aruba’s tourism industry.

The export endeavour was not successful though. There is not much of this history to be found. There is a report however, of a ship called “De Eyckenboom” that transported 20 slaves from Curacao and 50 horses from Aruba to New Amsterdam. Unfortunately half of the horses perished during the journey and the rest arrived to weak to even stand on their own feet. The original documentation, a letter from the Governor Peter Stuyvesant dated June 25 1660, mentioning this can be found HERE. Four years after the journey of “De Eyckenboom” the British captured New Amsterdam from the Dutch, and changed the name to New York.

Pirates of The Caribbean…..on Aruba

The Dutch were engaged in various wars, such as the Franco Dutch war and the 4 Anglo Dutch wars. During these periods there were many privateers or buccaneers, also known as pirates, roaming the sees between the Caribbean islands. These were seamen and sailors who would attack military and merchant vessels of a specific country with the blessing of another one (privateering). Jan Erasmus Reining, a Dutch buccaneer was one of them. He even served under the more famous Henry Morgan & Rock Brasiliano. Reyning’s visit to Aruba is documented. See it HERE on page 237. He landed on Aruba in 1677, fleeing from St. Maarten after being defeated by French Admiral Duc d’Estrées. His fame stems from the book: The Devils Anarchy; The very remarkable travels of Jan Erasmus Reyning, Buccaneer. Or as the book is called in Dutch: “Zeer aanmerkelijke reysen gedaan door Jan Erasmus Reyning”. 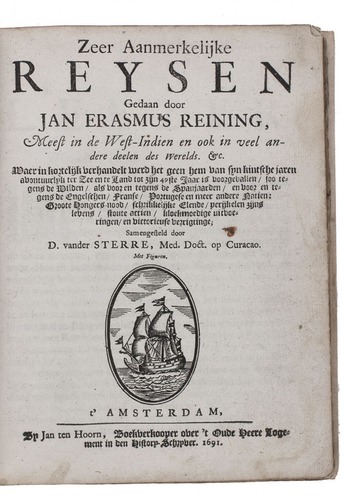 These visits from pirates have also found their way into Aruba’s folklore. I remember my grandmother telling me stories about fishermen seeing ghosts at night. These fishermen would tie up and hide their boats between mangroves or other vegetation on and near the beaches. Legend has it that there have been pirates who buried treasure on Aruba, and cut off the head of one of their crew and buried the body and head with the treasure to guard it.  I don’t know if it is true, but I hope that someday someone does find treasure dating back to these years.

Aruba is still Spanish property…..or is it Dutch?

During the 80 years war with Spain, the Dutch captured Curacao, Aruba and Bonaire for their salt pans and strategic positions off the coast of the mainland. This happened without fierce battles or dramatic events. It happened so swiftly and quiet that the Spaniards did not realise they lost the Islands. Proof of this is the fact that it was not until almost 100 years later, that the then Spanish ambassador to the Dutch Republic, Vizconde de Herreria, asked an official status of specifically Aruba. The Dutch replied that they did not understand the fuss. Aruba has been theirs for a long time already. The original letter still exists in the archives of Simancas, Spain.

So the take-away on our Aruba roots here are: 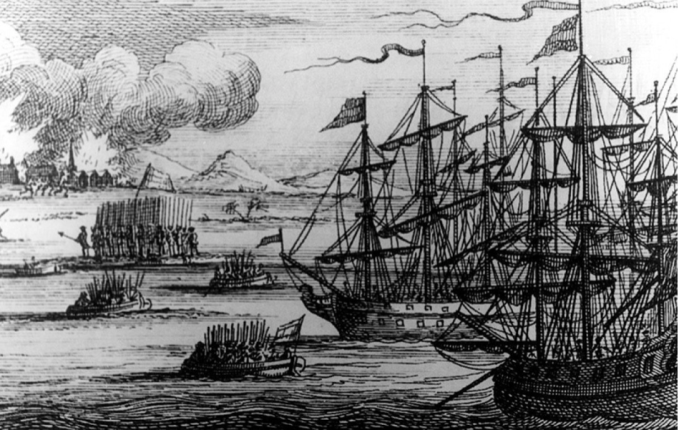 The history of Aruba goes a bit dark after the WIC conquered it from the Spanish. There is not a lot of documentation. Curacao was the main Island housing the senior leadership, Not much happened on Aruba, and I think that it is for this reason, plus the fact that there were no note worthy leaders/commanders on the Island, that not much has been documented. It isn’t till around the 1700’s that we get to find out more again on what actually happened on Aruba. The following is what I have managed to find out. I will update in case I find out more.

Populated by the Caiquetios of the mainland Arawak tribe, deported by the Spaniards and then safe-haven for freed Arawaks from both Hispaniola and the mainland. The evolution of the Aruban population has been turbulent to say the least. At least we know that our first roots are based on the coastal region of what are now Estado Falcon in Venezuela and La Guajira in Colombia. The initial Spanish contacts do not seem to have had a significant impact on the DNA of the early Arubans. They did, however, have a profound cultural influence by introducing Catholicism to them. This will reveal itself to be of some importance later on in the history of Aruba.

In the previous chapter we learned that the arrival of the Dutch was more out of necessity than desire to conquer the Islands from the Spain. And Aruba in this case was less important than the sister Islands of Curacao and Bonaire. Aruba lacked a safe harbour like in Curacao. And it lacked saltpans like in Bonaire. Nevertheless, Aruba was pat of the package, and therefore fought over between the 2 countries.

As part of the 80 year war between Spain and The Netherlands, the WIC was founded. Its main purposes being:

It was founded in 1621 but started operations in 1623 (remember the 80 year war would go on till 1648).  It was not until 1634 that the WIC decided to make a serious attempt to conquer Curacao from the Spaniards. Aruba soon followed in 1636. This was al led by Johannes van Walbeeck. Contrary to popular belief, the Islands became property of the WIC and not colonies of the Netherlands. The WIC even prohibited colonisation by individuals. The Islands became sort of “farms” for the WIC. The local Arawaks were “persuaded” to work while small garrisons of WIC officers and soldiers defended the islands. It was not even allowed for their wives to join them on the Islands. This debunks an important assumption in Aruban history that the Dutch colonised us and that our Dutch Caribbean development or heritage, if you will, started here. Initially the presence of the WIC did not influence the population and cultural much on Aruba. Other that according to some researchers, many Arawaks fled the islands to the mainland due to a preference for Spanish rule.

During all of this the WIC and the 7 provinces of The Netherlands were active elsewhere in the Americas (amongst others):

Aruba in that time fell under Curacao supervision which in turn fell under Supervision of Recife. The highest ranking officer on Aruba was called the Commander. Together with some cavaliers, he had to manage small scale goat farming, which was used to supply Curacao with additional food. It seems that right after being conquered, it took some years before an official Commander has been appointed to Aruba. Apparently the first Commander, Hendrik Martens, was appointed in 1660. Without disrespecting Aruba, it was clear that it had a marginal role at the time.

After the fall of Recife (pernambuco) in 1654 Aruba and its sister islands fell under “New Netherlands” and New Amsterdam (currently NY city). After the British conquest of New Amsterdam, the 3 islands formed a unit of themselves. With Curacao being the lead Island with a Director and Aruba & Bonaire with a commander each.

The take-away on these facts for our history are: